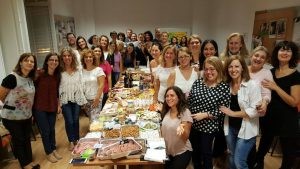 About forty teachers of middle and secondary schools from four different countries met here in Palermo from the 24th to 28th of October to take part to a training course hosted by the Centro per lo Sviluppo Creativo “Danilo Dolci”. The teachers have experimented non-formal education technics such as the theatre of the oppressed, role-play games and simulations, team works, brainstorming and guided debate, to acquire new methods to educate their student to the topics of diversity, human rights and active citizenship.

In the framework on the Erasmus + project OTHERNESS, the four partner organisations developed a teachers manual with a total of 48 activities to be implemented in class to address several sensitive issues such as the respect of the human rights, the different aspects of diversity, ethnic, gender, intergenerational, social and so on, and to promote the importance of an active and aware participation in the community’s life, the respect of the environment and of the other people.

Each activity included in the manual consists also of a digital tool (quizzes, videos, handy software for students, interactive tools and animations) to make the addressed topics more attractive for the students and send the messages in a more effective way.

In Palermo, teachers tried in practice some of the activities included in the manual during an intense and productive week, full of reflections, discussions, performances and games.

The teachers involved in the training will implement the activities in their schools in the next months as a piloting to verify their applicability and efficacy on the students. Basing on their feedbacks, the necessary changes will be done for the finalisation of the proposed resources.

The Manual of OTHERNESS is available in English and it will be available soon also in other 4 languages (Italian, Bulgarian, Greek and Portuguese) on the website othernessproject.eu under the “Resources”.